Gregory Peck…Prince of the Golden Age of Film 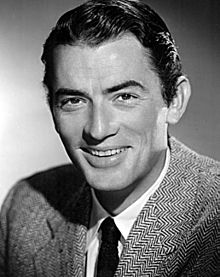 The year 2016 marks the 100th anniversary of the birth of one of America’s greatest film actors---Gregory Peck.  Whether playing iconic roles such as Captain Ahab in “Moby Dick” or Atticus Finch in his Oscar winning performance in “To Kill a Mockingbird,"  Peck never ceased immersing himself into the character he was portraying and movie audiences responded by taking him into their hearts and making him one of Hollywood’s most beloved film stars.

This program will examine his career from his early roles in the 1940’s in films such as “The Yearling” and “Gentleman’s Agreement” through his transition to box office star during the 1950’s in “Roman Holiday," and “The Big Country” and his classic later roles in the 1960’s and ‘70’s in “The Guns of Navarone," "Cape Fear," and “MacArthur."  Included in the presentation will be video excerpts from numerous interviews he gave prior to his passing in 2003 in which he reflects upon his life as a film star and his love for cinema.