The Musical World of Andre Rieu 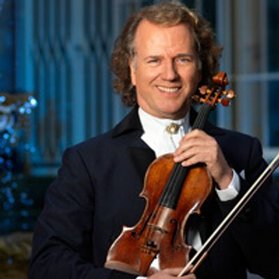 Over the past four decades the Dutch violinist, conductor, and musical arranger Andre Rieu has thrilled audiences around the world with his large-scale theatrical performances of great classical and popular music.  After first creating the Maastricht Salon Orchestra in 1978 and then the waltz-based Johann Strauss Orchestra ten years later, Rieu’s fame as a musical artist and impresario soared. Recently he has been responsible for bringing great concert works and Broadway show tunes to casual music lovers via highly theatrical live outdoor performances which have been simulcast to audiences around the world.

Featuring a series of personal interviews and video clips from several of his best performances, this program will delve into Rieu’s background, his passion for the waltz as a musical art form, and his dedication to bringing the classics to a worldwide audience.
Click on the arrow above for a preview of this presentation
​